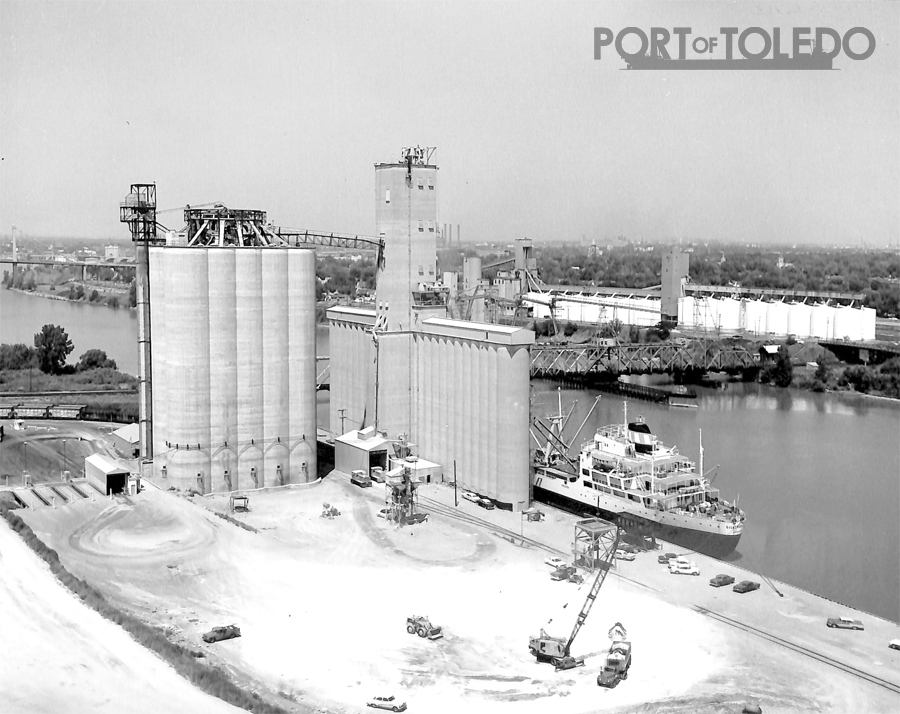 The aerial image above shows the loading of a “saltie” at the Anderon’s grain elevator in 1965. “Salties” are vessels that come onto the Great Lakes from the Atlantic Ocean, usually by way of the St. Lawrence Seaway. In 1960, following the opening of the St. Lawrence Seaway, the Anderon’s opened this loading facility, the first on the U.S. side of the Great Lakes designed for deep water ocean vessels. In 1964, they added an addition, increasing their storage capacity to 16 million bushels, with the ability to load 1 million bushels a day onto ships. Click here to see another image of grain elevators in Toledo.

The St. Lawrence Seaway opened the Great Lakes to larger vessels from the Atlantic Ocean. Before the Seaway opened, smaller ocean vessels could reach the Great Lakes through the New York State Barge Canal. Click here to learn about an ocean vessel in Toledo in 1948. In 1964, Harold Anderson, senior partner of the Anderson’s, testified before Congress about the effects of the St. Lawrence Seaway upon their business. The opening of the St. Lawrence Seaway had allowed them to increase their overseas shipping of grain bushels by 30 million bushels, as well as improving the price per bushel. Anderson said, “Toledo is in the most advantageous position in the lakes as far as the grain movement is concerned.”

We want to hear from you! Leave a comment below to tell us about your knowledge of the grain trade in Toledo.

Want to join the discussion?
Feel free to contribute!